Fertility personified in the world of bingo 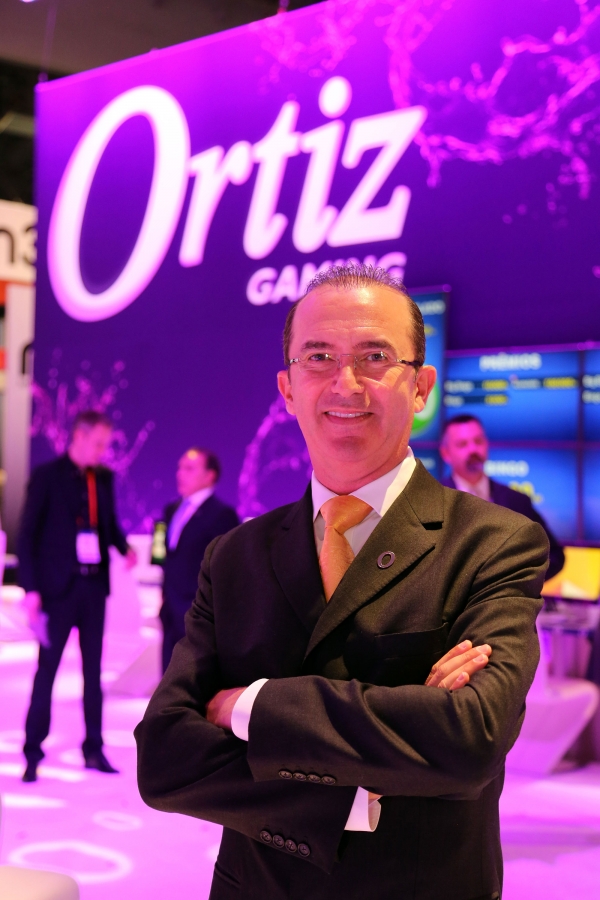 (GMB Exclusive) - Games Magazine talked exclusively with businessman Alejandro Ortiz, chairman and founder of Ortiz Gaming, company with Brazilian DNA with global presence and a long trajectory in the market. A profound knower of the sector in the country and waiting for the movements of the discussion of a gaming law, Ortiz begins to outline the strategy of how the company will act in the country: “We want to be the best technology provider in Brazil.”

GMB - I would like your presentation to our readers ... Who is Alejandro Ortiz and what is his history in the gaming industry in Brazil and in the world?

Alejandro Ortiz - I entered the gaming industry with the advent of the Zico Law, which legalized and regulated bingo in Brazil. After the opening of the first bingo card, I started the work to homologate the videobingo machines, which brought modernity to the activity and allowed the growth of the sector. And that led me to lead the Brazilian market. Before the end of the activity, I tried to introduce the videobingo model in the international market. Other companies in the industry have also done the same, exporting this genuinely national technology out of Brazil.

Today, Ortiz Gaming is operating in several countries in Europe, Asia and America, including the United States, in addition to having our games in the online world. Ortiz Gaming is expanding the concept of videobingo, expanding to other areas of gaming. We created Bingotronic, which is the concept of paper bingo, but played electronically and with the possibility of interconnecting several rooms. It's a big differential because we can bring the heat from traditional bingo to the electronic system. Bingotronic was initially designed for the Brazilian market, but we are already introducing it in other countries.

We've also developed OrtiZone, which is tailor made furniture, which can have the entire Ortiz Gaming game library, to be played on local servers or with internet access. As the company is very agile, we also create reel games, lottery games, skill games and many others. In short, the opening and the possibility of the introduction of videobingo in Brazil, allowed me to grow in the market achieving a prominent role in the country. Subsequently, I started to expand to the international market. With the same mission to innovate, create and, in this way, grow, increasing the range of product offerings with a differentiated service.

GMB - For years, Brazil has lived with ups and downs in the bingo industry, but nevertheless you had a strong presence in the market. What assessment do you make of that period?

Brazil experienced ups and downs, mainly due to the lack of clear legislation, causing the market to remain at various times without regulation. Until the closing of the market, I tried to be the best provider. At the beginning of the activity, the equipment was imported and everyone had a little of the Las Vegas concept. Butthe mentality changed. Initially I imported cabinets and software, but the game did not fall into customer taste. Over time our suppliers began to listen to us and to make requested modifications. The result was a success, and this encouraged me to develop the software and the cabinet in Brazil.

For this development, I took into consideration the type of player that frequented the rooms in Brazil. The typical Las Vegas player shifted from one machine to another all the time, with his bucket of coins. I noticed that the videobingo player was different and spent hours having fun on the same machine. In this way, I re-created the cabinet format and especially the software. In the case of the cabinet, we switch the "up-right" seat to the "sit" format in which the player is effectively seated. A few months later, this format became the market standard. That's when I also introduced the 19-inch touchscreen monitor so players could interact with the screen.

But the main change came in software, when we changed some paradigms. One was that people were charmed by the magic sound of coins pounding on the plates of the machines when prizes came out. We changed this pattern by introducing the first voices announcing the sounds of the prizes: Double Line .... Bingo !!! We started to give importance to the prizes and not to the sound of the coins. Las Vegas withdrew the coins several years later, following this trend. The change has altered the way in the attendance in the rooms. Without the dispensing of coins, the payments became manual, requiring attendants. In the beginning the businessmen were a bit annoyed by the increase in personnel, but soon realized that this increase raised the customer attention and the volume of bets.

The next step was the change in the program game, creating the accumulated by islands of machines, proportional accumulated to the bet made, increase of extra balls, etc. I experienced a magical moment with one success after another. It was during this period that the Pro-Bingo Movement was born, with the goal of winning a law for the sector that would meet the market's desire. This work was in addition to what had been developed by the bingos association in order to raise the awareness of the country's legislators and show the benefits of the activity, such as the generation of jobs, fun for the elderly, prohibition of entry of minors and that was not a place for money laundering. But unfortunately, the market closed before we could achieve our goal.

GMB - The end of the industry promoted the birth of many companies abroad with Brazilian DNA. Ortiz Gaming is a clear example of this. How is your company currently positioned in the global market? Where is it based and where are the games currently available in the Ortiz Gaming portfolio?

Ortiz Gaming's operating model is to create in each market in which we operate our own structure. In each market there is a company constituted locally, with technicians, commercial, administratives, etc. We always supervise local businesses with our headquarters, respecting local laws and encouraging legal and responsible play. Our games are mainly developed in Brazil and the United States.

GMB - How do you handle this development? How to create games that keep the player's interest, especially the younger ones, and how do you guarantee operators that they will have the profitability they expect with Ortiz Gaming games?

Very good question. Before the answer, I would like to position myself on the typical player in our industry. We do not seek to serve a young audience, as it has other interests, typical of the age group. Our focus is on a higher-age audience, who looks for fun at restaurants, shopping, cinemas, theaters, and also gaming. This is not to say that the younger ones can not go to a gaming room, but surely the older people will have a greater tendency to go to those places to have fun. In creating our games, we take into account the entertainment time. That is, the time that the person will spend in our games should be able to entertain them and give the feeling that the time and money invested were worth it.

GMB - Brazil is discussing two laws, one in the Senate and another in the Chamber, to regulate gaming activity. What is your evaluation of the proposals and how do you see the future of the industry in Brazil?

They are two proposals with many differences between them. Both have the power to determine different paths of each other and legislators should be aware of this. My opinion is that the market must be free-initiative and that the market law itself should make it self-balancing. I am not in favor of market reserve. Like any free-market, we should have an agency that has the regulatory goal of overseeing and acting for the good of the market. In my opinion, the gambling law should be broad, serving all sectors, such as casinos, bingo halls, videoloterias, online, etc. If legislators are able to implement a well-designed law that meets the market's aspirations, thousands of jobs will be created, the real estate industry will be heated and several companies will be able to export technology, as was the case with videobingo itself. All this will increase the flow of national and international tourists and, mainly, generate billions of reais in taxes for Brazil.

GMB - Do you believe that Brazil will have serious legislation and attract large companies to the country?

Without a doubt, if we have a law that meets free initiative and that is clear and without changing rules from one hour to another, many international companies will come to Brazil.

GMB - What will be your position when the industry is regulated? Do you want to operate bingos in the country or will you just be a supplier of technological solutions?

This answer is directly linked to the future law. If it is well designed, transparent and guarantees security that investments will be respected, I have the greatest interest in the market, both as a provider of technological solutions and as a bingo hall operator. The companies that have the best technological solutions, the best operation of rooms, etc., will remain in the market. I hope to be in this market. Ortiz Gaming wants to be the best technology provider in Brazil and, in this case, I am speaking in all aspects of technology, which will serve the new market that opens.

GMB - Do you believe that Brazil will regulate and open gaming venues in 2017?

This is a difficult question to answer. But what I can say is that I would like this law to be voted on and regulated in 2017, taking into account all the aspects necessary for the future market. Brazil can not stand in the counterflow of the world.