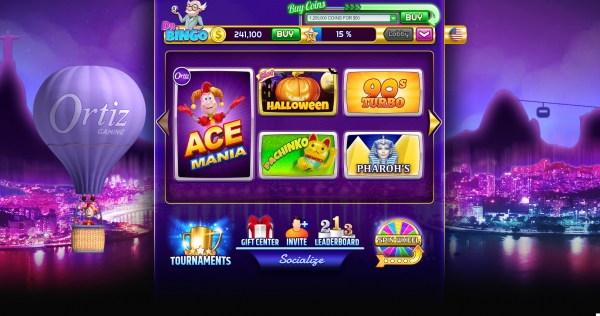 “Gamesmart is a perfect partner for Ortiz and we are looking forward to seeing our games on their platform. We are confident that Gamesmart and its Doctor Bingo players will enjoy the very best Video Bingo experience that exists in the market today,” said Eduardo Tupper, COO of Ortiz Interactive, a division of Ortiz Gaming.

“We are delighted to be partnering with Ortiz; this is an agreement that helps us strengthen our business and the Doctor Bingo brand, both in Brazil and internationally,” stated Omri Adler, CEO of Gamesmart LTD.

Ace Mania was live on the gaming platform May 2nd, 2016 and is already one of the platforms top titles. New Ortiz Gaming titles will be released throughout the year strategically to provide fresh content for the Doctor Bingo fan base.

This partnership comes at the perfect time as the Brasilian Gaming Congress (BgC) event is being held in Brasilia this week. The BgC will address the legislative, political, and regulatory process of creating the legal framework for gambling in the country. Both companies have strong, recognizable brands in the Brazilian Social Gaming market and are poised to lead in the forefront of the legalization of gaming in Brazil.

Gamesmart is a social mobile gaming developer which focuses on development and distribution of local games in emerging markets with its current focus on the Latin American market in general and Brazil in particular. Gamesmart’s vision is to go after the "street" local game, games that were played and are played in game rooms across the world and bring them to life in the social space adding a unique story and gamification elements surrounding them. The company’s current focus is Latin video bingo for the Brazilian market. These are the most popular and most played games in Brazil – single player bingo played quickly like slots by millions of people every month.

With its R&D center in Israel and China and an upcoming live dealer social application launch Gamesmart is ready to leverage its social expertise into worldwide expansion.